The intense demeanor of the MassKrug Carry Competitors...the electric Atmosphere of the Dachshund Dash...the icy stare of determination as the first barrel is rolled out in der Bier Barrel Race...the awkward stance of the Strong Stein Competitor...the bleak look of racers losing bier in the MassKrug Relay. Registration for all Games will open in August  - Cost for Entry: $40, includes admission for all participants (up to eight) 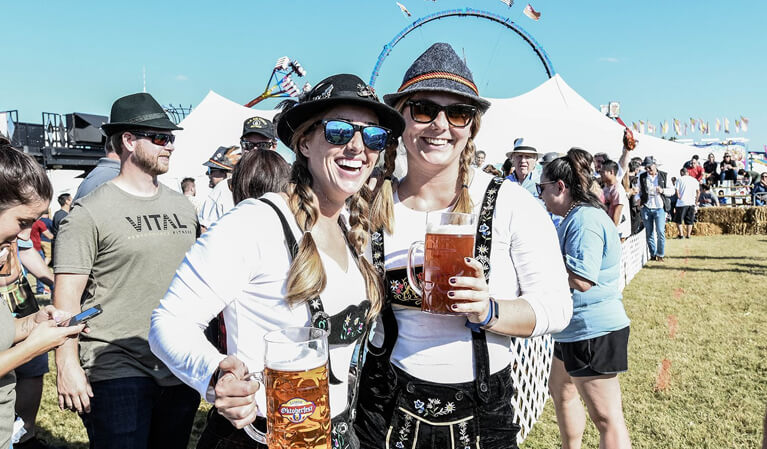 The Karbach Games and Competitions Arena becomes our own center of the universe Saturday at 2:00 PM for true fans of German bier. Why? Because it is ground zero for the  Oktoberfest Bavarian Cup (Bayerische Tasse) Team Challenge, a challenge for the ages. Teams of 8 people (plus one alternate/tug-of-war addition), each with a minimum of four women, will compete for the Goldenes Fass (Golden Barrel) Award, to display proudly in a lobby, break room or cubicle. The competition consists of four intense but fun games - the legendary Bier Barrel Race, the MassKrug Relay, the Strong Stein Hoist and the Das Tauziehen (Tug o' War)! There will be non-stop action and everyone will chicken dance because it will be so much fun.

The Bavarian Cup (Bayerische Tasse) is comprised of 4 games with teams accumulating points each round. All teams must check in no later than 1:20 PM on the day of the event. All contestants must be over 21 and present valid ID at check in.

The Bavarian Cup is limited to the first 20 teams to sign up. So better get your team together quickly!

Games of the Bavarian Cup 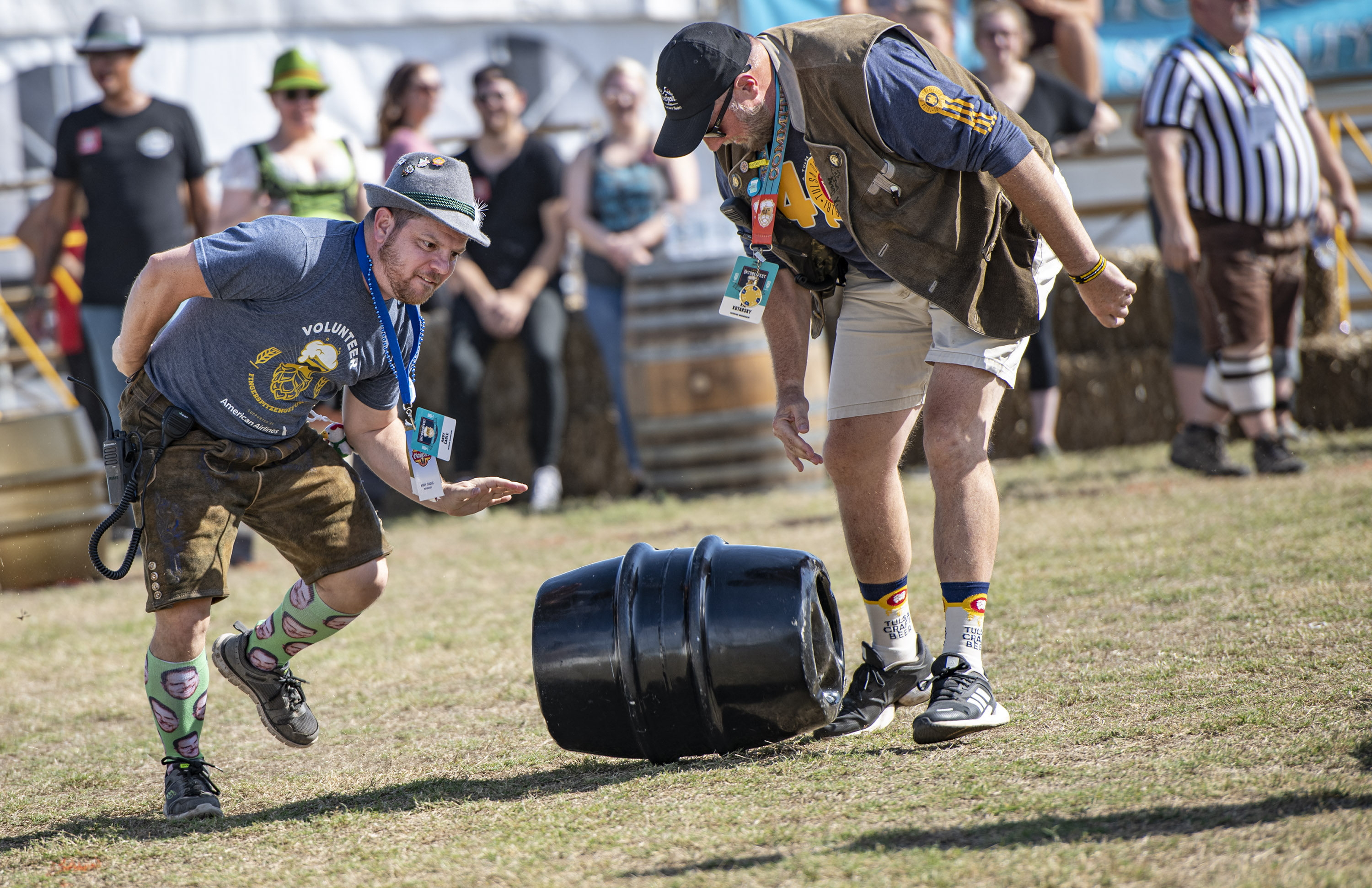 The intense, back-and-forth, barrel-rolling action will be enough to make anyone dizzy with excitement. The race involves teams rolling empty wooden barrels around a course, and the fastest time wins. Points deducted for straying off course and knocking over spectators. Rolling with costumes or in full German trachten will result in bonus points - Four people (2 men, 2 women) from the team will compete in this relay race.

Don’t cry over spilled bier! Traditionally one of the most accessible Oktoberfest games for novices, the Krug Carry contestants are scored on speed AND spillage. Carrying up to 35 pounds of bier quickly and safely across the course can be difficult, but the winnings at the end of the competition hopefully makes it worth the effort! Professional servers show you how in their own Invitational Krug Race Tournament, and then make it work. Two people (1 man and 1 woman) from the team will compete in this relay race. 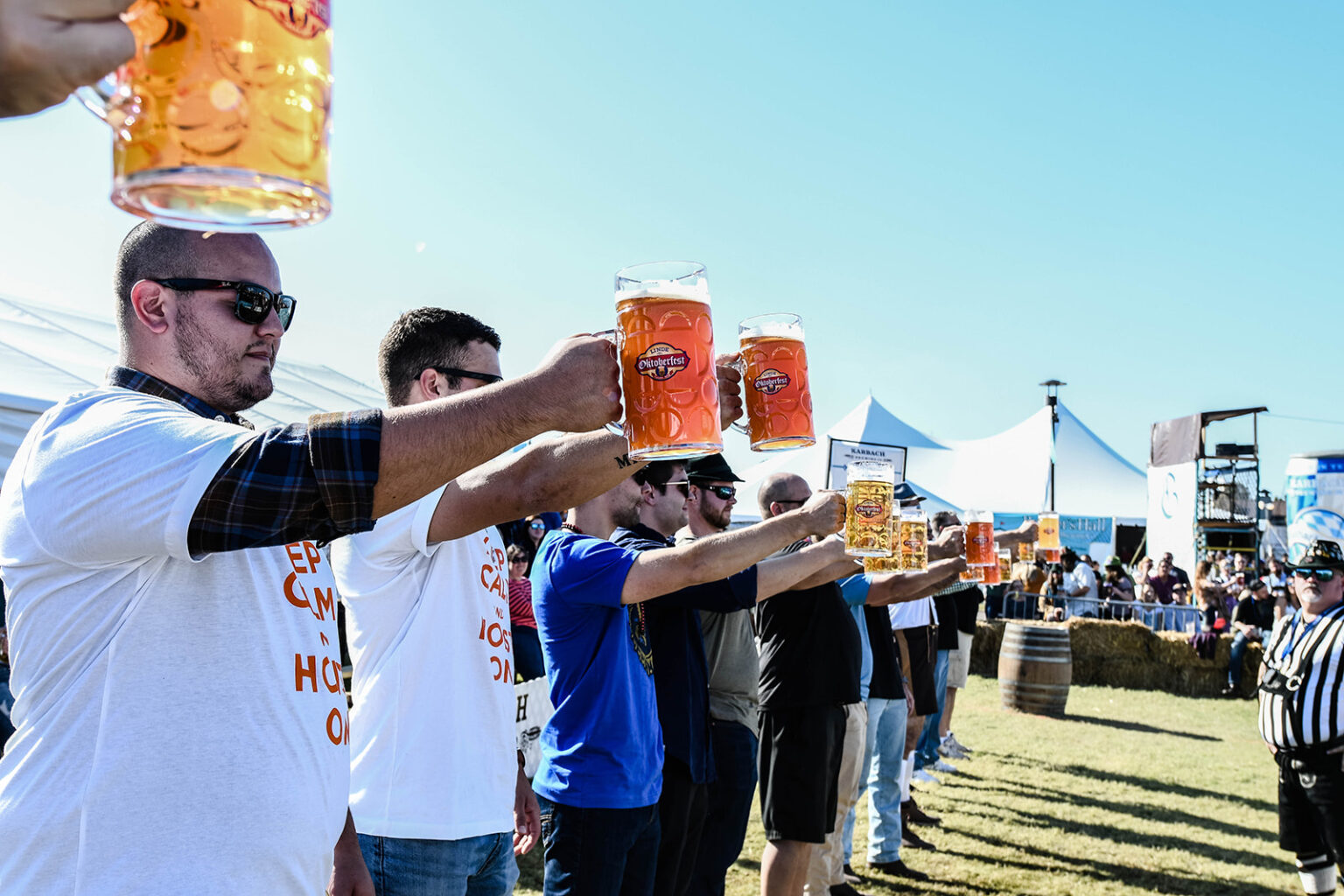 Do you have what it takes to Hoist one of our MassKrugs for serious swag? Are you Bavarian Strong? This competition of strength pits contestants against beer steins…as in, “How long can you hold out 34 ounces of beer?” The best part? You can win some serious swag! Preliminary competitions will occur randomly throughout the event, and take place in different tents - check the entertainment schedule. Watch for the pop-up competitions by roving bands of keg karting officials. Two people (1 man and 1 woman) Tug of War is one of the most ancient games known to man and there is evidence that it was played across the ancient world including ancient Greece, Egypt and China. And we are sure, Germany. Also known as rope pulling, tugging war and war of tug (we have nicknamed it, "Tauziehen"), it remains today a popular sport that pits the strengths of two teams against each other and is practiced in some form in almost every country in the world.

Each Tug of War team consists of all 7 members of your team. At the start of the pull, the center line of the rope is marked and a line is drawn on the Wiesn. Both teams pull the rope, the winner being the team who manages to pull the mark on the rope closest to their opponents over the center line. The rope must be pulled underarm and nobody’s elbow must go below the knee, otherwise a foul will be called. Matches are often a best of three pull, the winner winning two out of the three pulls.

NOTE: There is a cost to register, which includes admission, chicken hat, MassKrug and a 16-oz beverage token. Pre-registration is required! 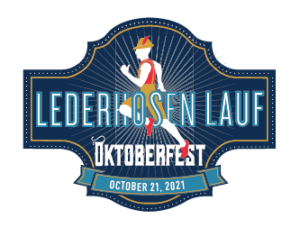 Feed your active lifestyle with this great running event, with multiple distance options. And while you’re at it, fill your gullet with beer! That is, if you’re 21 or over. Every finisher will receive a commemorative Kleiner Krug (small stein) along with one free 16-oz beverage voucher. There will be prizes for the best costume! The start and finish of this race will be smack dab in the center of  Oktoberfest, at the Oktoberfest Games and Competitions Arena, and the route takes in a course through the festival grounds. Check out the Joint Race Registration with the Toga Run during the Greek Festival.

Wiener dogs are already funny to look at. Now try watching over 75 of them zig, zag, jump, and generally get confused in a test of speed and intelligence! Ok, we’re being dramatic. The pups just need to run 150 feet from one end of the Dash to the other. Do you have dachshund with a need for speed and a nose for the finish line? Sound easy enough? Start training your wiener dog now! Dogs wear numbered Hot Dog Bun costumes and compete in heats of five to six pups. Dogs in each heat are escorted on leash the full length of the course to encourage wagering by spectators. Cost is $10 per entry (pre-registration required), includes admission for both you and your wiener. Wieners (winners) receive Festival Money and prizes (please note - we've upped the ante!): 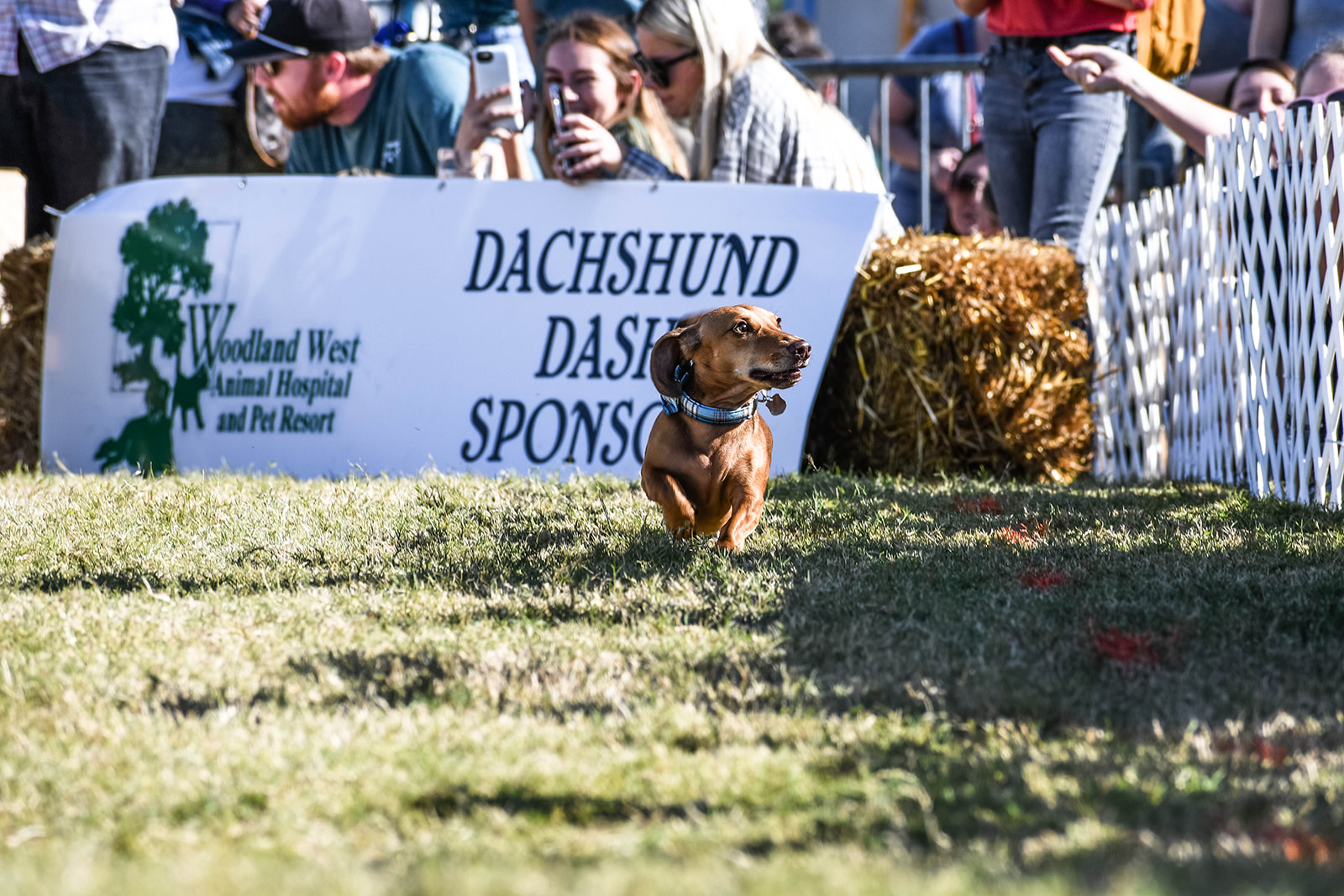 NOTE: Competition is FREE to enter, but pre-registration required and includes admission for both you and your pup. Here is the complete set of rules.

The Dachshund Parade - Parade Your Wiener and Watch 'em Laugh!

Free to enter the Costume Parade but a valid ticket for admission must be purchased (wieners are free).

This is an incredible way to show off your weiner and your absolute desire to dress them up and take them out. This costume parade will stop all traffic along the Osage HauptStrasse! Starts at 1:00 PM in the Oktoberfest Games and Competitions Arena. Prizes for the best costume awarded by our internationally recognized wiener dog costume judging officials.

NOTE: The Costume Parade is FREE to enter, but pre-registration is encouraged and admission ticket must be purchased separately (dogs get in free). 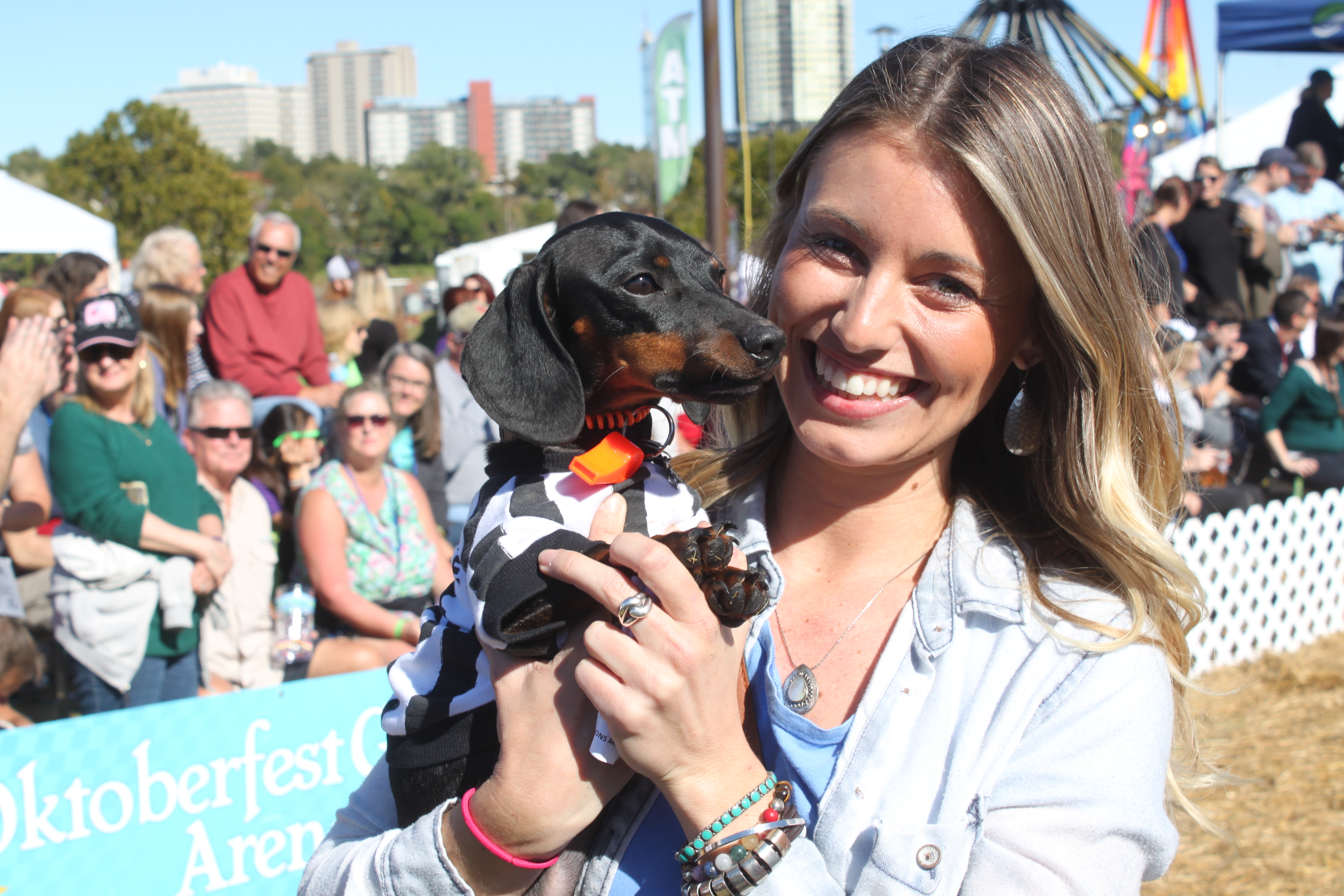